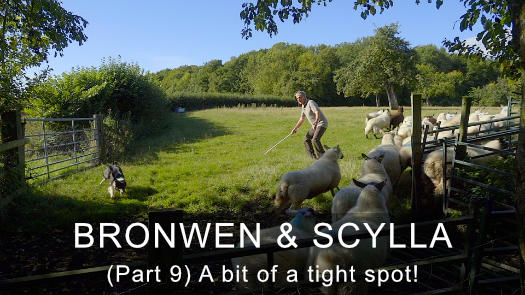 BRONWEN & SCYLLA (Part 9). Learn about many aspects of training sheepdogs, including teaching the dog to stay back out of the way when required, the “look back” and ways to reduce the dog’s fear when working in confined spaces. – 26.4 min

For best results watch the videos in the order they appear here.

Watch a complete training session, full of valuable training lessons! This tutorial shows nine-month old Gloria, a bright, enthusiastic young dog, and her fourth training session with some well-dogged sheep. As well as showing a typical dog in training, warts and all, the tutorial demonstrates some of the techniques that we’ve talked about in other tutorials, such as making use of the training ring; effective use of the training stick; reinforcing the stop, and flank commands; widening the flanks; taking … Watch now

Valuable information for would-be sheepdog trials competitors Two-part tutorial for those people who hope to take part in sheepdog trials.Preparing your dog and yourself for your first sheepdog trial is not a simple task. There are so many things to remember. Where do you go when you arrive at the field? What happens during the competition? What should I avoid? Who can I ask for help? These two tutorials delve quite deeply into competitive sheep herding in the UK and … Watch now

A great opportunity to get to know sheepdogs – at work and play! Following on from the very popular video – and while we put the finishing touches to our latest sheepdog training tutorial, we thought we’d give you a real treat!”Sheepdogs Time Out” comprises of no less than four great chapters from our DVD , and is a shade under 17 minutes of fun and training with our dogs … Watch now

English or Español subtitles available on all our online tutorial videos